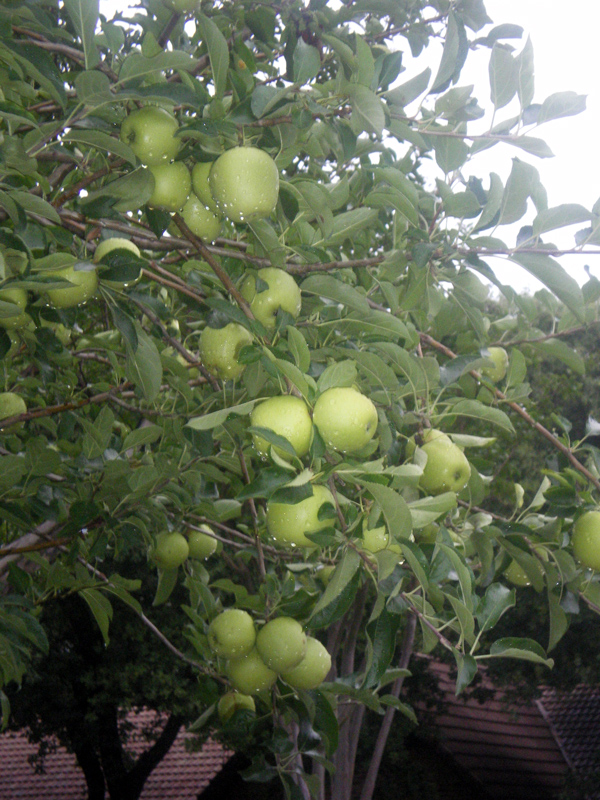 Clearly, apple trees like it when it rains a lot. All the time.

We’ve had Washington State-like weather here in North Texas the last two months and the branches of my little, loneÂ apple tree in my yard are straining under a unprecedented load of ripe fruit worthy of the state.

It’s an apple tree that shouldn’t even be there. You see, the front and one side of the perimeter of my lot is lined with Crape Myrtle trees—13 of them to be exact. And right in the middle of the sequence, there is one little apple tree. It’s as if, early on, one of the Crape Myrtles died and they replaced it with an apple tree by mistake.

Oh, and due to some overhanging branches of a nearby oak tree, it leans heavily southward toward the street in search of sunlight. In past years (typically dry and hot) the tree has only produced a handful of golf-ball-sized apples. But this year… great land-o’-Goshen . . . we’ve got apples the size of babies’ heads. 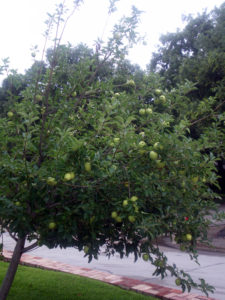 Click on the above picture and you’ll see that, instead of rudely dropping the fruit to the ground in a snit (Fine! Take it then!), the tree appears to be gently lowering it to the ground so to not bruise the little darlings. And it is so proud of its record productivity, it seems on the verge of taking a bow. Or a bough.

They’re starting to drop off now so I think they’re ripe. In fact, I know they are. I picked one up off the grass and took a bite this afternoon. Sweet. Yet tart. Swart! More Granny Smith-y than Golden Delicious-esque. But quite tasty. And all the more gratifying because it’s the produce of my little plot of land.

Free food. You gotta love that. And Mrs. Blather said something about an apple crisp in my future. Gotta love that, too.