What follows is the inevitable violation of my pledge not to speak of Donald Trump again prior to the election. (You called it, reader Ted.)  I’m about to do so only in the context of responding to some requests I’ve received to share my thoughts about Sen. Cruz’s non-endorsement speech at the Republican Convention last week.

But first, as is often the case with me, a little historical context . . .

In February of 1988, two candidates were locked in a heated battle to be the Republican nominee for President. Senate Majority Leader Bob Dole  mounted a serious challenge to Vice-President George H. W. Bush’s plans to succeed Ronald Reagan in the White House.

Dole had massive momentum coming out of a strong win in the Iowa caucuses and heading into the New Hampshire primaries. Bush, the sitting vice-president and consensus favorite, had come in a distant third in Iowa. (Do you recall who finished second? Pat Robertson!)

Suddenly, New Hampshire became a must-win for for the stumbling Bush campaign. Not surprisingly, Bush went negative—attacking some of Dole’s past Senate votes throughout the New Hampshire primary. When the votes were tallied on February 16, 1988 Bush won New Hampshire by nine points.

In an inteview with NBC News later that night, Tom Brokaw asked a clearly dissappointed Dole if there was any thing he’d like to say to Bush. 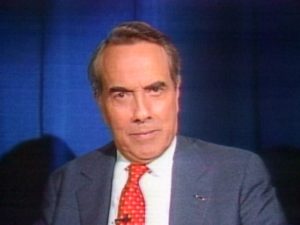 Stop lying about me. And get off my lawn.

Dole groused, “Tell him to stop lying about my record.”

{Cue the sounds of a record needle being dragged across a record; men gasping in horror; women fainting; and the media shifting into high dudgeon mode.}

Dole’s testy use of the word “lying” became an instant scandal. Political historians widely view this as the moment Dole lost his chance to become president.

For days afterward, media headlines and office watercooler chatter revovled around the question of whether Dole’s cranky use of the “L” word revealed that he didn’t have the temperament or character to be President of the United States.

Let that sink in for a moment.

Only seven presidential elections ago, simply saying your opponent was lying disqualified you for the White House in this nation because you were clearly some sort of loose cannon.

The new Democrat nominee just narrowly avoided a federal indictment in the middle of the primary but instead was only declared to have been “extremely careless” bordering on “gross negligence” with national security secrets.

And, as I noted here, the Republicans just nominated a man who uses boasts and insults as a substitute for arguments and schoolyard taunts in place of reasoned rebuttals.

In response to critiques of his policy positions, he reflexively resorts to crass mockery of his oppenent’s appearance or name. A few examples from the primaries: 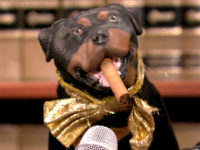 In other words, “lying” may the most gracious, temperate thing Mr. Trump said about any of his opponents in the primaries. And it worked. Running as Triumph: The Insult Comic Dog cost him nothing. Two weeks ago the Republian party made him their standard bearer.

Keep in mind, Mr. Trump has shown little interest in wooing or reassuring the sizable portion of the Republican base that supported Ted Cruz.

On the contrary, three weeks before the convention, Trump was still dragging out the “Lyin’ Ted” smear in front of the microphones out on the campaign trail.

That’s right. With the nomination already sown up and Cruz out of the race, Trump was still using precious media minutes—not to criticize Hillary Clinton or Barack Obama—but rather to jab a stubby thumb in the eyes of Cruz’ voters one more time.

I was flabbergasted when I saw it. I literally couldn’t believe what I was seeing. This has to be some old footage, I hoped. Nope.

In a moment in which a rational candidate should be seeking to reassure and woo and the supporters of his most successful rival, Trump was going out of his way to rub salt in their wounds.

Hand to heaven, the thought passed through my mind that Trump doesn’t really want to win. That his fragile, insatiable ego is enjoying the attention but doesn’t want the headaches, responsibilities, or constraints of actually governing. (And that was before I saw this!)

Which brings us to Ted Cruz and his now infamous speech before the Republican National Convention. As you probably know, Cruz’s decision not to endorse Trump, and to close his address with the words, “Vote your conscience,” enraged many, disappointed others, and bewildered the rest.

Cruz was booed off the stage and instantly vilifed for being “self-serving” and “selfish.” He “betrayed” his party. He was “cowardly.” It was a cold “political calculation” designed to advance his own personal interests rather the interests of the party and the nation.

Every word of this is nonsense on stilts—but that last bit most of all.

Cruz was most likely setting fire to any future national aspirations with that speech, and he knew it.

No, the move most in alignment with Cruz’s self-interest and future political prospects was to bow to party pressure, hold his nose, and endorse the clearly troubled individual. The next-best, next-least-career-damaging option for Cruz was simply to stay home, as Ohio governor John Kasich did.

Cruz took neither of these path-of-least-resistance options. In my view, he took the path of honor. Allow me to explain.

Also keep in mind that during the primary campaign, Mr. Trump saved his nastiest and lowest smears for Cruz. (Yes, I know all political campaigns turn ugly and run negative ads. I’m not naive. But Trump’s attacks on Cruz were orders of magnitude beyond the pale.)

They are legion. But two of the most egregious of these were Mr. Trump’s repeated references to a nutball conspiracy theory that Ted Cruz’s father, a devout evangelical Christian, played some role in the assassination of JFK. 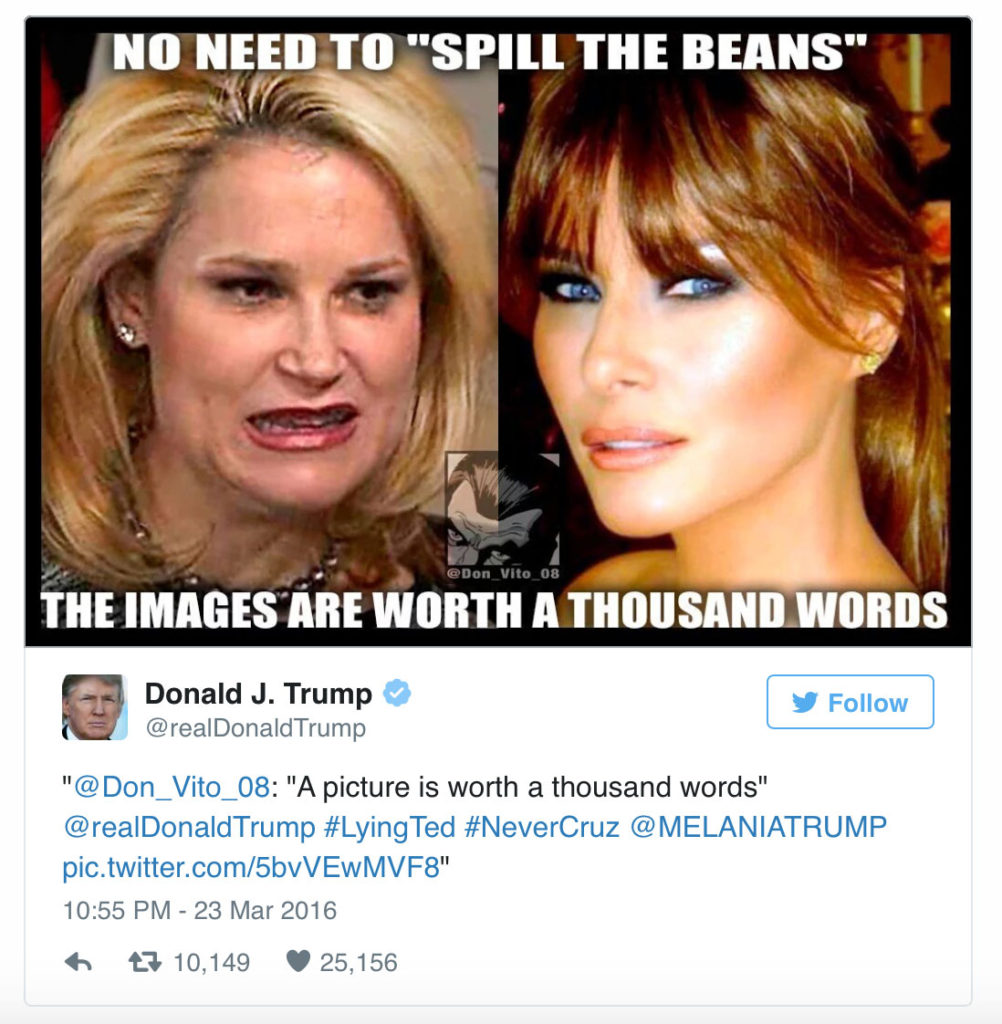 By the way, for the record, here’s a couple of more-representative samples of Heidi Cruz’s grotesque visage. Brace yourself: 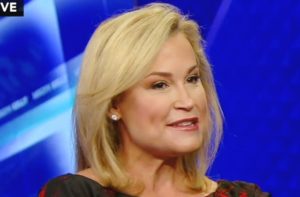 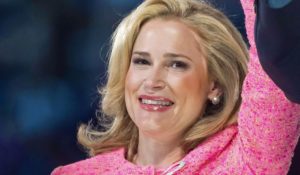 Yes, we’ve come a long way since 1988. Today, being the kind of candidate willing to say, “my wife is so much hotter, so vote for me” actually works with a large swath of the American electorate.

What a time to be alive.

That’s right. Honor. An old-fashioned and nearly extinct concept in our postmodern era.

In other words, I believe Cruz chose to walk into a no-win situation simply because being a loyal husband and son means more to him than being a successful politican. Isn’t this at the heart of the explanation he offered in a meeting with the Texas delegation the very next day?:

“I am not in the habit of supporting people who attack my wife and attack my father. That pledge [to support the Republican nominee] was not a blanket commitment that if you go and slander and attack Heidi, that I’m going to nonetheless come like a servile puppy dog and say thank you very much for maligning my wife and maligning my father.”–Sen. Ted Cruz

Why not take him at his word? It’s just too simple for many to grasp. Most in our dying culture are too jaded and cynical to believe a politician can choose principle over self-promotion. But there it is. And it is perfectly consistent with the way Cruz has handled himself since entering the Senate.

Before announcing his candidacy for president, Cruz was already one of the most unpopular figures in Washington precisely because he stubbornly refuses to play the game. Former Oklahoma Senator Tom Coburn was like this, but Cruz is Coburn on steriods.

It is clear to me that Ted Cruz is constitutionally incapable of compromising his principles to advance his own interests—of “going along to get along.”

Frankly, I’m really not interested in hearing complaints about Cruz from any person who has ever whined about how all politicians abandon their values once they get to Washington, and put career advancement above their principles.

Here is one who didn’t, and it seems to be wildly unpopular.

Running to the Left

As I write here in the days immediately following the Democrat’s convention, Mr. Trump displays much more interest in wooing Bernie Sanders voters than courting skeptical conservatives like me. This speaks volumes about Trump’s ideology (or lack thereof.)

It actually makes some political sense because Trump is running to Hillary’s left on a number of issues—among them national defense, trade, and a couple of other issues. In other words, a number of Trump positions are more in line with the left-wing Bernie voters than than conservative Cruz fans.

I plan to vote my conscience. I’ll try to explain what that looks like in an upcoming post. (Just as soon as I figure it out.)

. . . in which the last words many people hear before their lives are prematurely snuffed out, are “Allahu Akbar.”

But it will not always be this way. The Soviet Union seemed the most threatening and ascendant a few years before it completely collapsed.

. . . that Mankind’s oldest and bitterest enemy is keenly interested in dividing people along racial (tribal) lines. It’s his oldest, tiredest, and yet still most effective trick. 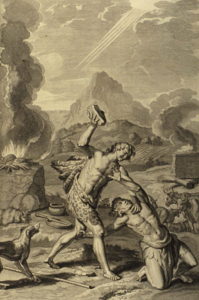 Tribalism has been the spawning ground of murderous hate ever since the very first farmer grew resentful of the very first rancher back in the Garden.

Here in America, tribalism now goes by the more sophisticated name of identity politics. We call our tribes “communities.” The enemy of our souls doesn’t really care who you hate, just as long as you pick a side and let the news and social media fuel your tribal fire.

The devil is a sadistic, twisted kid nudging two hungry dogs toward each in hopes they’ll fight to the death over a scrap of food. I’ll pass.

As a citizen of a kingdom in which race and sex are meaningless concepts (Gal. 3:28), I have only one side to take. The side of love. 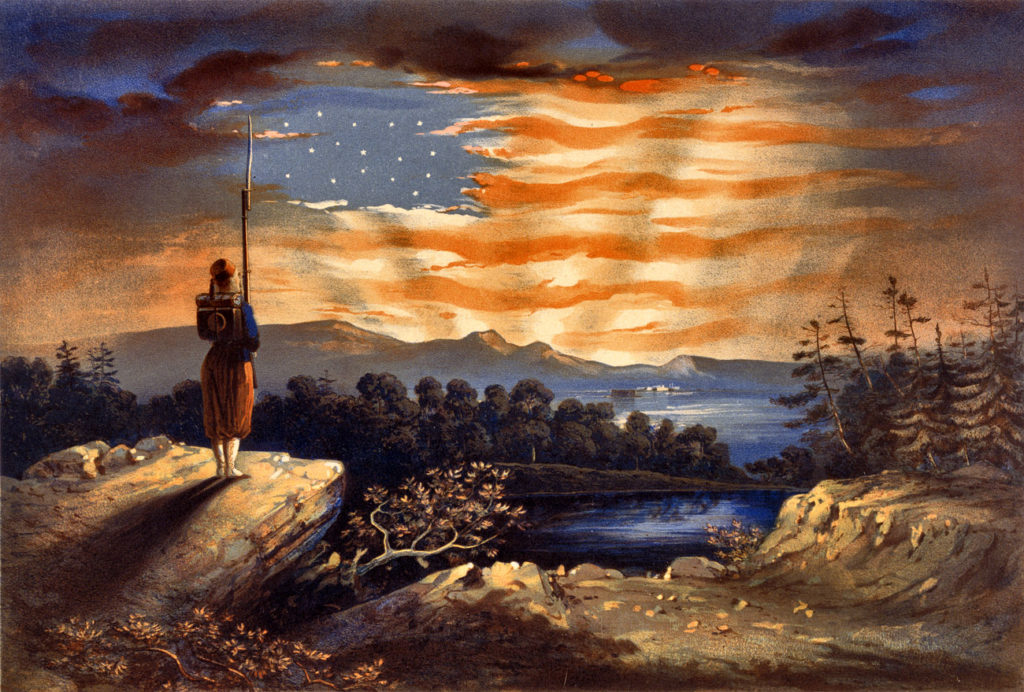 Captive people long to be free.

After several generations of freedom, free people start longing to be taken care of:

A people can never be both free and taken care of.

Free people gradually trade their freedom for false promises of security and comfort.

The impulse to craft a governmental solution to every human ill is a religious impulse. It’s messianic at the root.

Big government is a false messiah. It promises utopia, heaven on earth, but can never deliver on those promises.

Real freedom means freedom to fail, pick yourself up, and start again.