Father’s Day, like Mother’s Day and Valentine’s Day is a man-made holiday. A synthetic creation of our culture rather than an organic product of the Christian calendar.

Don’t get me wrong, I’m not against these observances. I’m for them. But they do have the effect of tainting anything done on them with a slight element of perceived obligation.

In other words, if on August 14th I spontaneously bring my wife flowers and a handwritten note expressing my devotion, she is likely to feel nothing but pure, crystalline appreciation and delight. She’ll think, “My goodness, my husband really cares about me.”  But that same gesture on February 14th, while being met with gratitude, will not have near the same impact.

Indeed, several days before Valentine’s Day each year, my bride usually starts saying things like, “Please don’t feel like you have to get me anything for Valentine’s Day.” And she means it. “Okay,” I say dutifully, while mentally trying to figure what I’m going to get her. After all, I’m not going to be THAT guy. You know. The guy who didn’t do anything for the wife he loves on Valentine’s Day.

Do you see what I mean? Even the most heartfelt expressions invariably pick up extra baggage in transit on these days. It’s unavoidable.

Of course, the answer isn’t to boycott the holiday. It’s to make sure we’re faithful to express love and gratitude on other days as well. It’s those random, surprising, spontaneous expressions that carry the pure power to bless.

Today is my first Father’s Day since Dad went to Heaven back in September. Tomorrow is his birthday. He would have been 82. Father’s Day always fell within a day or two of his birthday which always resulted in combining the two observances for him.

Just this last week, Mom held a giant yard sale in which she sold much of Dad’s accumulated man-stuff. Actually, my sisters and brother-in-law organized the sale. Mom’s part was to agree to allow stuff to be sold (and to allow a bunch of stuff to be hauled to the landfill.)

My sisters went through a “junk room” and an attic in the old homestead that had 40+ years accumulation. They found quite a few treasures. Among them: 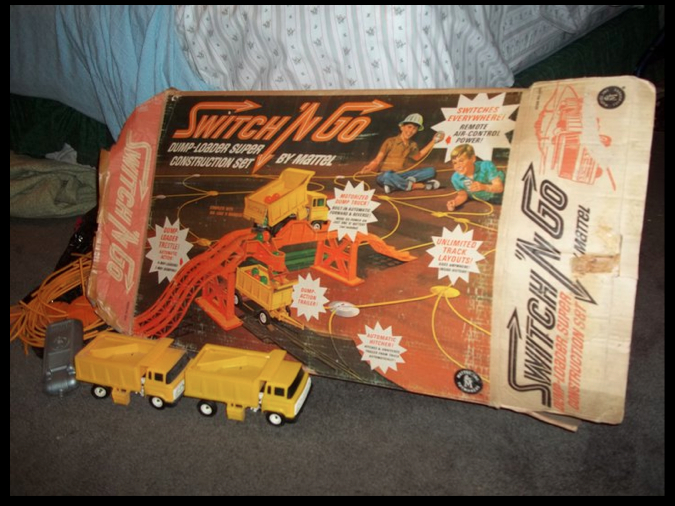 My sister sent me this picture and at first I didn’t recognize the trucks as being mine. But then I looked at the bridge on the box and neurons deep in my memory cells started firing. I also have a memory of assembling the plastic tubing that comprised the “track” that the battery powered trucks ran on.

The date on the box is 1966. I would have been seven years old the year this showed up under the Christmas tree.

At another point in the excavation, they came across a pair of little spurs. These, actually: 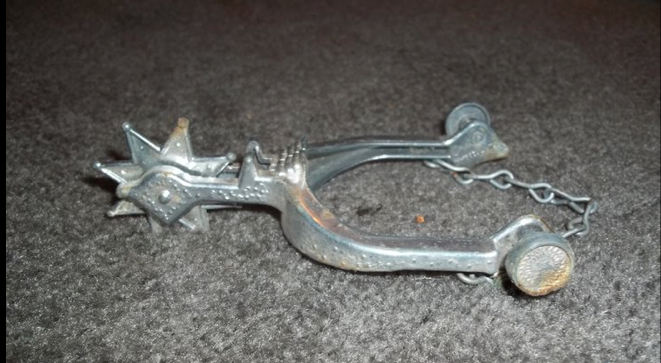 I remember these well, even though they go back even farther into my childhood. I got them the same Christmas I received my first pair of cowboy boots. The one’s I’m wearing in this picture: 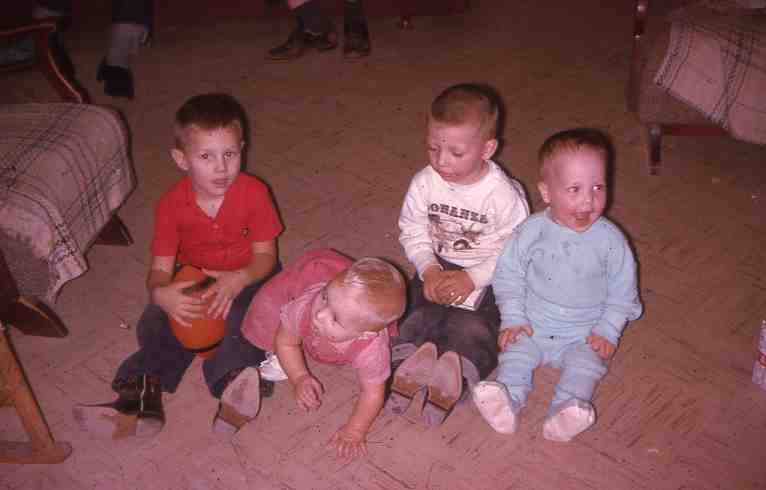 Yes, that’s me, second from the right rocking the white sweatshirt. ( I think it says “Bonanza.”) My little brother is wearing the footie jammies. If he’s two years old here, then I’m four.

By the way, those five $25 savings bonds that were sitting in box in our old house for the last 34 years? . . . Guess how much that $125 would have grown to today if it had been put in a compounding investment bearing an average of 10% per year.

Enough to buy a very, very nice pair of cowboy boots. And maybe even some awesome spurs.

Father of the Bride

The Road to Perdition