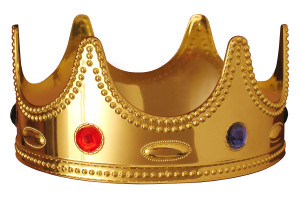 The scepter will not depart from Judah,
nor the ruler’s staff from his descendants,
until the coming of the one to whom it belongs,
the one whom all nations will honor.

Jacob, the patriarch, is dying. His twelve sons have gathered around his bed to hear from their father one last time.

In his final hours a powerful spirit of prophecy settles upon the 147-year-old grandson of Abraham. Beginning with the eldest, Jacob prophesies in turn over each of his sons. When he reaches his fourth-born, Judah, he concludes his prophecy with the lines from Genesis 49 cited above.

The “scepter” and “ruler’s staff” speak of kingship. The implication is that all the legitimate Israelite kings would hail from Judah’s descendants, a.k.a., the tribe of Judah, “until . . .”

Until the coming of “the one to whom it belongs.”

A thousand years later a similar spirt of prophecy falls upon one of Judah’s descendants. Gifted with special vision, Isaiah looks down through seven more centuries of history and sees the coming of that “one whom all nations will honor.” He writes:

For a child will be born to us, a son will be given to us;
And the government will rest on His shoulders;
And His name will be called Wonderful Counselor, Mighty God,
Eternal Father, Prince of Peace.
There will be no end to the increase of His government or of peace,
On the throne of David and over his kingdom,
To establish it and to uphold it with justice and righteousness
From then on and forevermore.
The zeal of the Lord of hosts will accomplish this.

These words foretell the arrival of more than a mere messiah. More than a military genius who will deliver the oppressed from their oppressors. More than a temporal leader with a finite, albeit wonderful, term of administration.

No, Isaiah sees a king.

The “government” rests upon his broad, strong shoulders. He sits “on the throne of David” and rules “over his kingdom.” But there are two distinct and unique aspects to this king’s rule.

The first is that this king’s reign is eternal. “From then on and forevermore . . .” the prophet reveals.

The second is that this kingdom never stops expanding. Ever. The borders of His domain are forever and always moving outward. New territory is constantly being brought under His rule of peace. And this expansion continues for eternity.

Seven hundred years later, the imminent arrival of that extraordinary king was announced by an archangel to the woman who would carry Him for nine months. The words of the messenger are a direct and unambiguous reference to Isaiah’s prophecy:

“You will conceive and give birth to a son, and you will name him Jesus.
He will be very great and will be called the Son of the Most High.
The Lord God will give him the throne of his ancestor David.
And he will reign over Israel forever; his Kingdom will never end!”

Within the first two years of His birth, sky watchers from Mesopotamia will arrive seeking the recently born “King of the Jews.” They had seen the signs indicating His royal birth in the stars.

Jesus—this one who was foretold, foreseen and ultimately born—is many things. He is a Savior; a kinsman Redeemer; a Deliverer; an Elder Brother; a once-and-for-all Sacrifice; a High Priest and Intermediary. Yes, He is all these things.

But we do well to remember. He is, and ever will be, a King.

. . . He raised Him from the dead and seated Him at His right hand in the heavenly places,

far above all rule and authority and power and dominion, and every name that is named,

not only in this age but also in the one to come. And He put all things in subjection under His feet,

and gave Him as head over all things to the church,

which is His body, the fullness of Him who fills all in all.