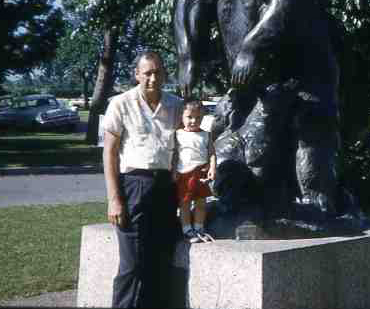 It seems that with many of the truly important things in life, we don’t really understand how to value them until they’re gone.

Dad would have been 88 this Tuesday. Father’s Day always fell around, or on, his birthday. So we’re doubly mindful of him this weekend.

I honor him today by reposting the eulogy I delivered on behalf of my siblings at his homegoing service several years ago.

It is customary, at a moment like this, to mention some of the attributes and achievements of my father–in other words, to talk about who he was. Instead I want to share a few thoughts about who Dad was not.

Our father was not pushy.

At home, as in his work life, he was not prone to imposing his will or asserting his opinions. And he did not enjoy confrontation. I get that. I’m temperamentally wired in a similar way.

I vividly remember one of the few occasions in which he really tried to change my mind about something–probably because it was such an unusual occurrence.

As a father, he would offer you his opinion but wouldn’t push it. He would occasionally offer you his advice unsolicited. Most of the time he would not opine unless asked. When he did offer advice, He was usually right. And when you ignored his advice, as I often did as a younger man, and made a royal mess of things, he would invariably be right there to help you mop up in the aftermath and without the standard and customary I-told-you-so.

It was the early seventies, I was about 13, and I had been lobbying Mom heavily to buy me my first pair of big bell bottom pants. Dad got wind of it. He had already, with some difficulty, reconciled himself to the longer hair which had increasingly become the fashion since the late ’60s. But now his oldest son was asking to dress like some character from Laugh In or Love American Style. He wasn’t a fan.

I remember being startled at how strongly he tried to talk me out of those pants I wanted. It was so out of character for him. I parried with the universal comeback utilized by all kids challenging a mystifying directive from a parent: “Why?”

He initially struggled to come up with a cogent, logical case for his ban on bell bottoms.  After floundering for a minute, he finally asserted–in so many words–that wearing bell bottoms could make me gay.

My recollection of his argument was not that bell bottoms would make me look gay, but rather that the pants were somehow imbued with exotic properties and powers that could actually make me gay.

I’m reasonably sure he was wrong about that. But he was right about most things–especially the things that mattered.

The long hair and the bell bottoms were just superficial manifestations of deeper cultural shifts taking place in our country in those years. And he didn’t like the way the winds were blowing. He was absolutely right to be wary.

I think that was one of the things that moved him to relocate our family from Oklahoma City to Wilburton. In the summer of 1965–the year the nation saw escalation in Vietnam, rising unrest on college campuses, and race riots in Watts–he moved the four of us as far out in the country as he possible could while still improving his job prospects as an aspiring college professor.

He saw the hills of rural southeastern Oklahoma as a good place for a kid to grow up. And he was right about that, too.

At that time it was just me and my younger brother, and we reveled and thrived in the wildness of the place. We roamed over the hilly, wooded countryside like two wild men of Borneo.

Dad made sure we knew how to properly tie a fishing lure and to use a gun safely. He saw that we got plenty of fishing, hunting, exploring and camping in. And when we got old enough, he served as co-Scout Master of our Boy Scout troop.

He wasn’t a perfect parent. But he got the big things right where my brother and I were concerned. And then “the girls” came along.

As he entered his early 40s, something wonderful and astonishing came alive in my Dad when those girls arrived in our home. He was suddenly animated, funny, and playful in ways we had never seen. When he was home, he invariably had both of them in his lap–one on each knee. And oh how he loved to tease them.

On Sunday mornings when they were three or four years old, Mom would dress them up and then send them downstairs to be inspected by my father. The first one downstairs would present herself to Dad, do a twirl, and then ask, “How do I look?”

Invariably, he would get a look of complete rapture on his face and gush, “You look absolutely grotesque!” And my sister would beam with delight.

This became a tradition that extended well beyond the time they came to understand the true meaning of the word grotesque. When they were teens he would create good-naturedly derisive nickname/titles for all the girls’ friends, among them, “Here Comes Trouble,” “Get Out of Town,” and simply “Toots.”

My father was not ambitious.

At least not in the way we usually think about ambition. Dad wasn’t driven to get ahead, climb anyone’s ladder, or draw attention to himself. He didn’t have a10-year plan, or even a 5-year plan. Actually, I don’t think he had a 5-day plan.

What he did have is something exceedingly rare in our day. Contentment. We live in a day in which few people seem to know how much is enough. However much they accumulate, they seem to always need more.

Dad knew what he wanted. A piece of land to call his own. The opportunity to dig in the dirt and grow a little food; cut some wood for his fire; to hunt and fish a little; to help out his neighbors when they needed a hand and the kind of neighbors who would do the same. A difficult crossword puzzle to master every day was vital, too.

And one other thing. To see his children doing well. He had all of those things. And that was enough for him.

Dad was not successful.

At least not in the way the world tends to measure success.

When he stepped over into eternity the other day, he did not leave behind much in the way of wealth, or titles, or headline-making achievements.

What he left behind was a 30-year long string of students—a lot of whom will tell you what they tell me whenever I meet one–that John Holland was the finest teacher they ever had.

He left behind a community of people who, to a person, will tell you he was good-humored and decent and kind and honest.

He left behind children who adored him. And a wife of 55 good years who had made him a better man.

I once heard a wise man say that he thought the world’s definition of success had it all wrong. He said real success was being the kind of man and living the kind of life in which—the people who know you the best respect you the most.

Come to think of it, John Holland was a success. In those terms, he was and is the most successful man I’ve known.