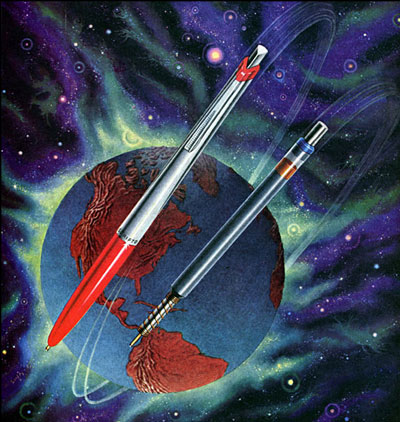 In a moment: One of the coolest web sites ever. But first a word of explanation.

I was born in 1959, which makes me a real sucker for the art and the whole vibe of the late fifties and early sixties. The cars were sleek and huge and had tailfins and the tailfins had lights that looked like rocket ships. (This was in all giddy anticipation of the flying cars we’d all be driving by the 1980s at the very latest.)

The picture above was for an ad for the Scripto Satellite. “The first pen designed and engineered for the atomic age!” the ad boasted. That’s another thing I love about the pre-Beatles, pre-Hippie era—the view that “atomic” power was going to make everything either niftier or neato-er, or both.

I love every sub-atomic particle of the Eisenhower era except for Jim Crow laws and segregation. (“Waiter, I’ll have the king-sized portion of the Civil Rights Movement but hold the Sexual Revolution and go very easy on the Great Society. The latter tastes good going down, but gives me gas and destroys the urban black family structure.)

Thus, I about fell out under the power like I’d been hit with Benny Hinn’s Nehru jacket when I found Plan59.com, a web site devoted to late 1950s art, advertising and ephemera.

Poking around in that site makes me feel like a kid watching someone reach for a frozen pot pie. You know. . . like this.