. . . Shouldn’t you guys have @StevePickett11 and a crew at her house trying to gin up a shame storm?  Maybe try to run her out of business? Go all Memories Pizza Indiana on her? Provoke a bomb threat or two?

Confused? Allow me to explain.

A troubling line was crossed here in Dallas-Fort Worth—in a lame and ridiculous sort of way—this week. The news department of the local CBS affiliate dispatched a reporter to a local woman’s business to ask her about something she posted on her Facebook page.

No, it wasn’t a bomb threat. Nor did she post the formula for a cancer cure. This woman is not a politician or an entertainer.

Dallas business owner Cheryl Rios found a camera in her face for sharing . . . wait for it . . . her strong lack of enthusiasm for the prospect of a female president.

That’s right. Cheryl prefers that her presidents come with a Y chromosome, an Adam’s apple, and a five-o’clock shadow. And she said so brazenly right there on her personal Facebook page (to her friends, relatives and former high school classmates).

(Now stay with me here. I’m not making this up.) Somewhere in the bowels of the CBS11 Newsroom—a real, honest-to-goodness news department in a major American city—someone thought this was newsworthy. Seriously.

Thus “Emmy-winning journalist” Steve Pickett sallied forth to see what this monstrous freak of nature had to say for herself. And we got this . . . 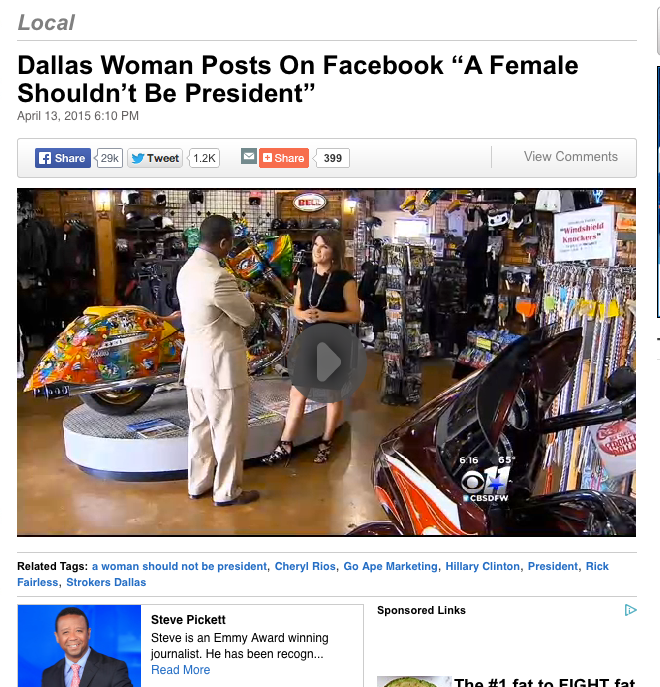 Now Cheryl obviously agreed to this interview. She could have declined to talk to these nincompoops and she would have been doing them a tremendous favor if she had—because they embarrassed themselves. But they did more than that.

They crossed a line.

You see, the moment news organizations start getting comfortable with making the off-the-cuff social media comments of private citizens fair game for news coverage—coverage which can get national traction on social media and prompt a vicious hate storm, as happened with Memories Pizza in Indiana a couple of weeks ago—then freedom of expression for conservatives and Christians is as good as dead in this country.

That’s why we really can’t allow these media enforcers of political correctness to get away with this kind of thing. If we don’t push back here it will only get worse.

Along these same lines, NationalReview.com’s Ian Tuttle took note and posted this: The Shaming of Cheryl Rios. I recommend it.

Now you’ll have to excuse me. I’m going to head over to my Facebook page and post something wildly reactionary and out-of-step with the spirit of this age.