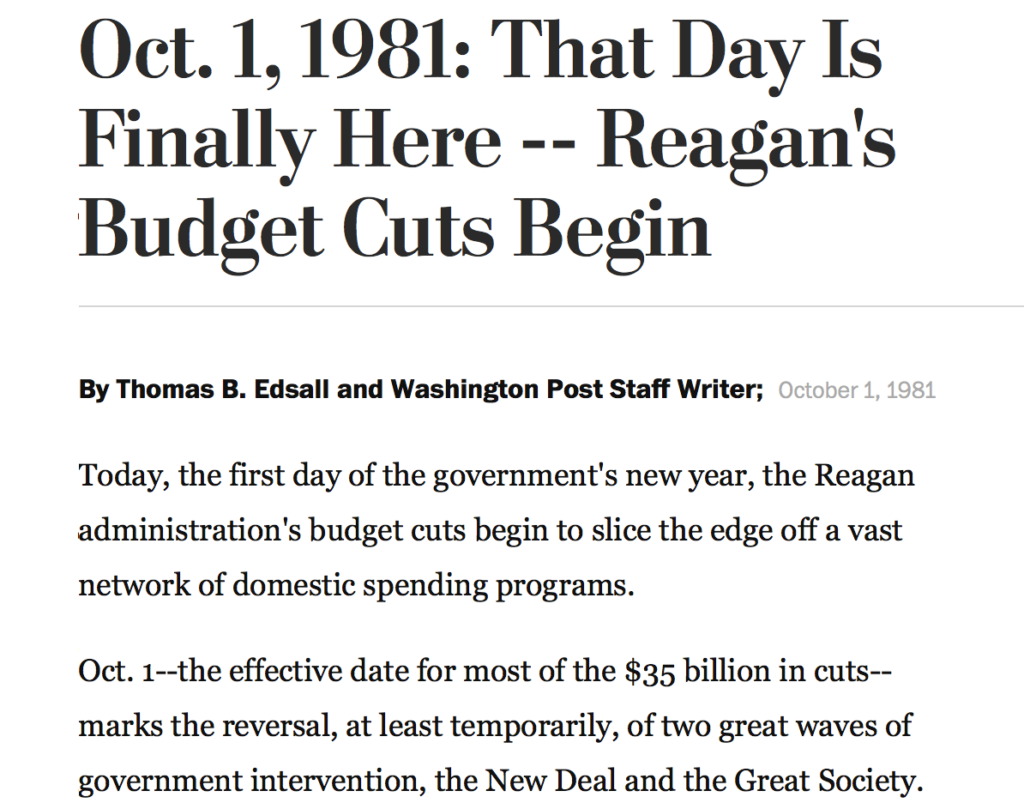 Watching the news and social media over the last week or so produced a strange, non-specific sense of deja vu in me. I couldn’t quite put my finger on it until I saw some teeth gnashing and garment rending on Twitter about President Trump stabbing Big Bird in the heart with rusty scissors.

That’s when I realized I’d seen this movie before . . . back in 1981 in the opening months of Ronald Reagan’s first term.

Reagan ran on rebuilding our national defense and cutting the size and reach of the national government. He’d even promised to eliminate the recently created Department of Education—established by Jimmy Carter to help the teacher’s unions strengthen their grip on the nation’s education policy.

As History shows, Reagan proved unable to keep that or most of his other promises related to shrinking the ever-expanding super-state. In fact, with Democrats in charge of both houses of Congress throughout most of his two terms, the best Reagan could manage was to slow the rate of growth.

But that didn’t keep the liberal media and political opposition from depicting him as a heartless fiend who delighted in oppressing widows, orphans, the poor, and the homeless.

To hear the wailing and caterwauling, one would have been forgiven for believing Reagan was personally running from hospital to hospital unplugging preemie infant incubators and cackling hysterically, twirling a long black moustache, as he shoved widows out of the second story windows of their homes.

Those “Reagan budget cuts” became a one-size-fits-all phrase for attributing to Reagan every individual hardship or hard luck story anywhere in the world. Each evening’s newscast featured the most pitiful story the reporters could dig up.

Every item about a layoff, flu epidemic, tornado, and pothole became an opportunity for some man on the street to condemn “them damned Reagan budget cuts.”

Which brings us to this week, wherein I made the mistake of taking a peek at Twitter. In a few short minutes I found literally scores of things like this: 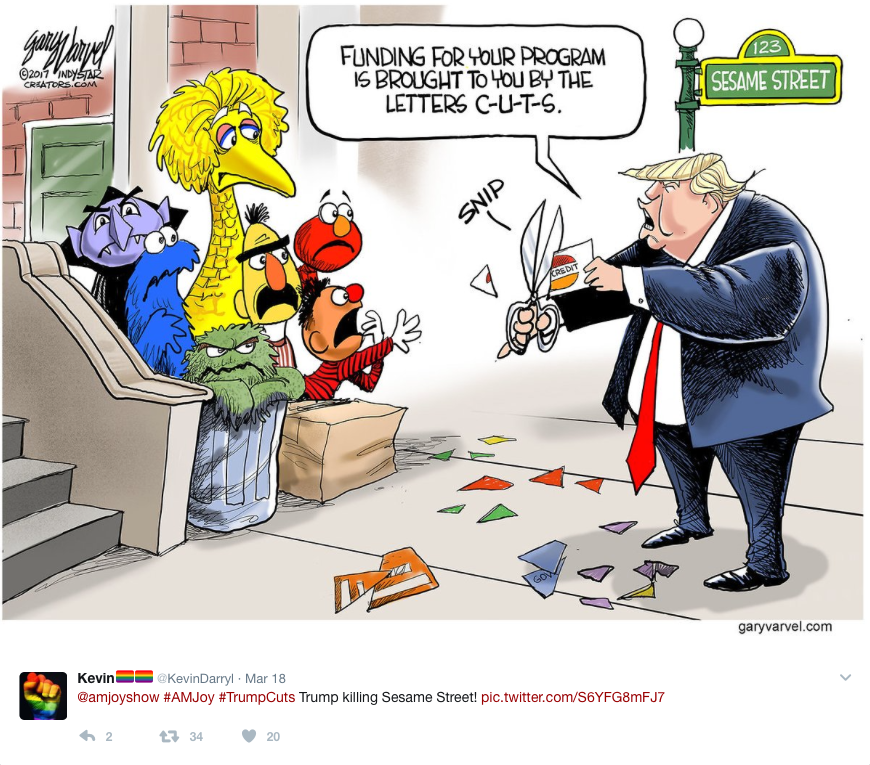 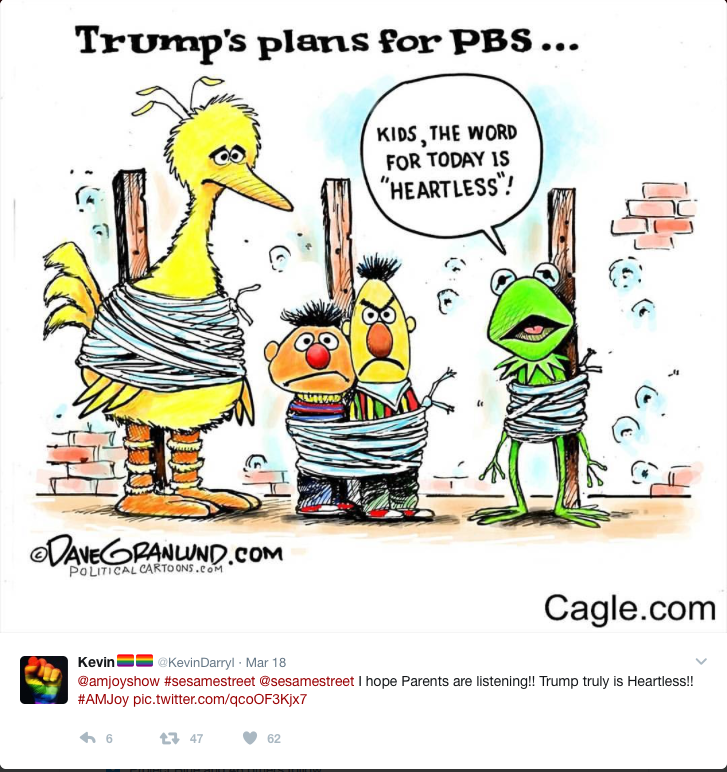 Now, Donald Trump is no Ronald Reagan. My reservations about Mr. Trump are well documented in previous posts.  Nevertheless, 36 years later, this is a pure repeat of 1981.

Of course, this is a propaganda war, and facts don’t really matter. Even so, the facts about Sesame Street are:

Pause to consider the irony of the outpouring of liberal outrage here. The folks at Sesame Street allowed themselves to be acquired by a premium cable channel that the poorest Americans cannot see. But it’s Mr. Trump who is evil-personified for cutting the budget of the ridiculous NEA.

As I said, what we’re witnessing is a propaganda war against Mr. Trump’s efforts to restore some fiscal sanity and boundaries to national government spending; and restore our neglected defensive capabilities in an increasingly dangerous and volatile world.

This is despicable. Sadly, it would probably never occur to a Progressive like Mr. King that some patriotic older Americans might not vote based purely on what most benefits them personally. Or that some of the few surviving members of the “Greatest Generation”—who grew up during the Great Depression and weathered the rigors of World War II—might just care more about their nation’s future than their own comfort.

Or that they might understand what few liberals seem to grasp—that it’s better when local charity is funded at the local level, where there is more accountability and less opportunity for waste and graft. 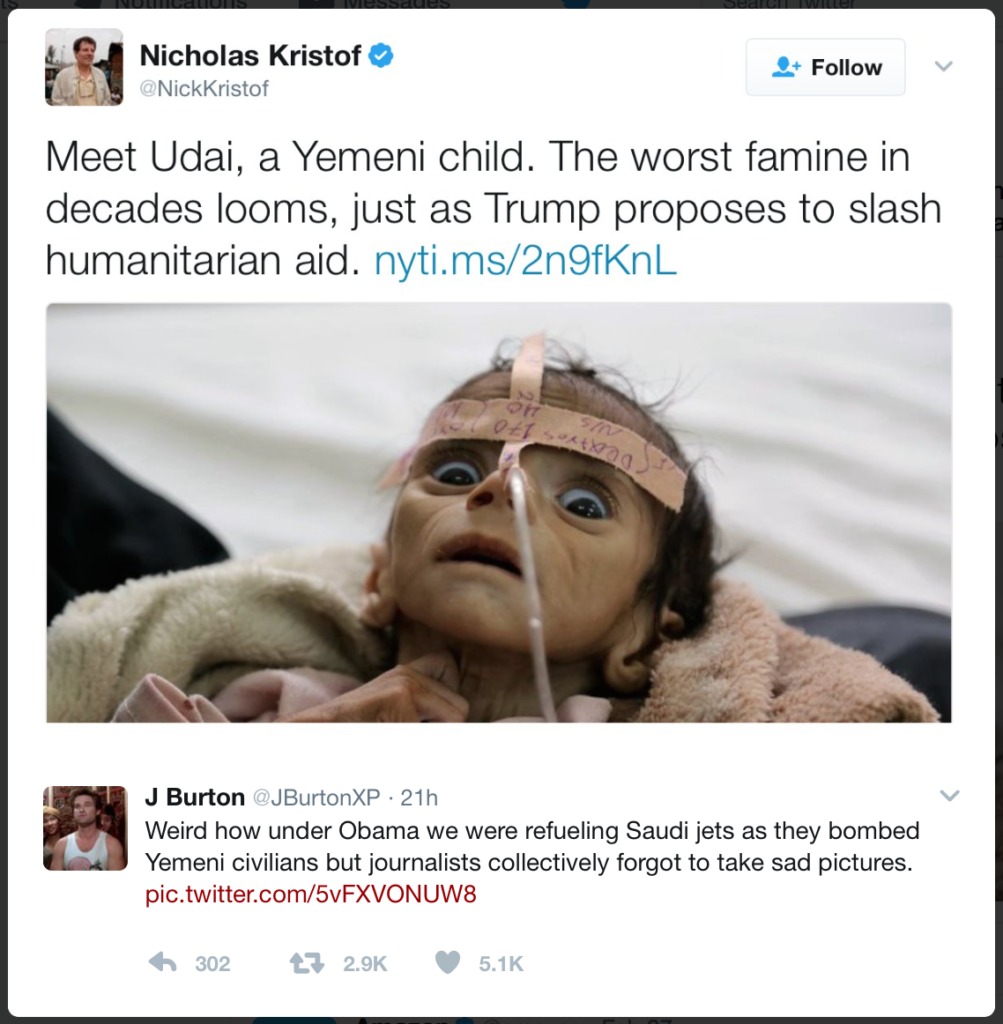 Dear God in heaven. If there is a more reprehensible form of political argumentation than the above, I don’t know what it is. There has been an ongoing human tragedy unfolding in Yemen for a couple of years now, but until yesterday, the only people who seemed to care were a handful of conservative groups.

It’s not wrong to care about tiny Udai above. On the contrary, it’s essential. What’s wrong is  choosing to care only when you can use him as prop to score points against your political “enemy.”

Several people I follow noted that within a few days of Mr. Trump’s election, we suddenly started seeing hand-wring-y news reports about America’s “homelessness crisis” after an eight-year disappearance. It astonishing how we had our homelessness problem solved for eight years but that it’s suddenly back with a vengeance.

Journalists have also just discovered that presidential vacations cost a lot of money, after eight years of utter obliviousness to that reality.

There is a complementary pair of assumptions underlying this hysterical resistance to cutting federal spending. One, that is pretty much an article of faith for most people today. It is:

At it’s heart, this brand of thinking is a form of idolatry. It assumes a powerful, centralized government can and should be:

It’s messianic and utopian. The problem for the Christian is that we already know Who the Messiah is, and it ain’t Uncle Sam. Yet Government is a jealous god. (See this great essay for more on that.)

It’s 1981 again. But this time around I don’t have a full head of hair or a soon-to-be-obsolete collection of eight-track tapes.