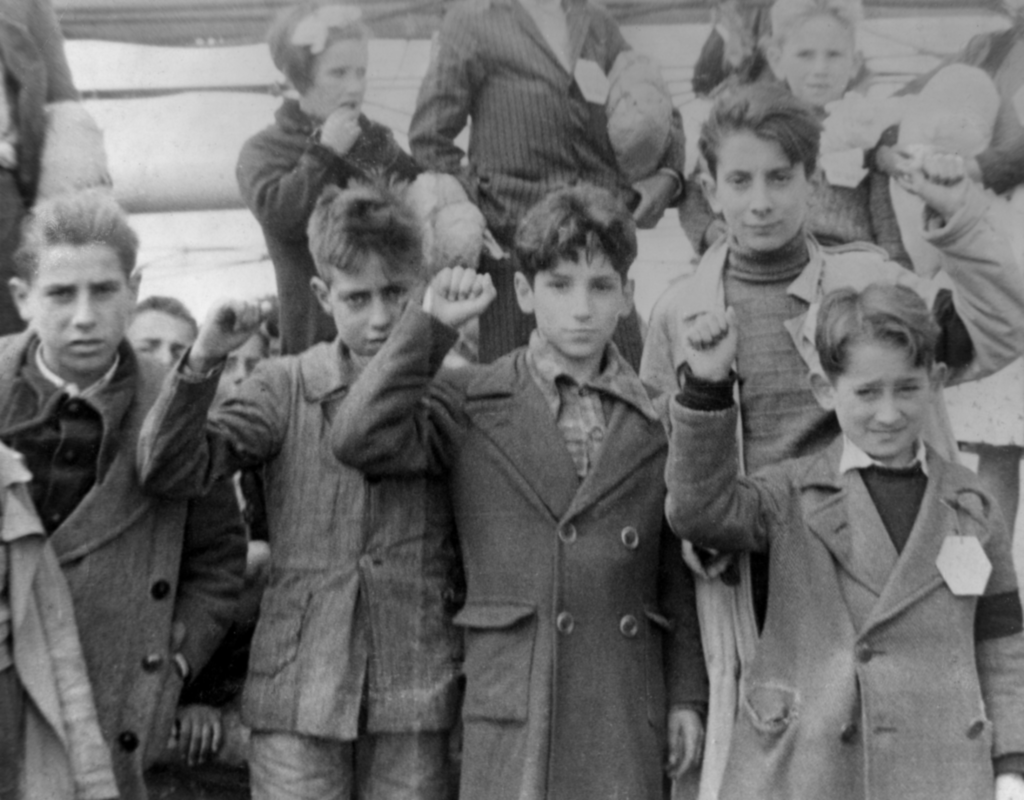 So . . . that recent ugliness and bloodshed in Charlottesville . . . some thoughts about the larger meaning and historical context. (Because that’s what I do here, provide historical, biblical context for current events.)

The Iran-Iraq War (1980-1988) taught me a jarring lesson I’ve never forgotten. Namely, that not every conflict features a side that good people can root for. Lifetimes of reading fiction, and watching movies and television, have left us all with an unthinking, unquestioned assumption that in every war there is one side that is “right” and another that is wrong.

But when Saddam Hussein’s Iraq invaded Ayatollah Khomeini’s Iran there was nothing for decent people to do but sit back wish that somehow both sides could lose.

The Iraqi’s were using chemical weapons and indiscriminately targeting civilians. 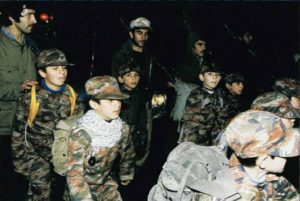 At the same time the Iranians were recruiting tens of thousands of young inexperienced volunteers and recklessly throwing them into battle in pointless human wave assaults.

Whenever they encountered an Iraqi minefield, they convinced or coerced child soldiers to walk through the fields to clear them—by setting off the mines with their bodies.

Again, in Iran vs. Iraq, there was no one to “root for.” Both sides were despicable in their own distinct way. A victory for either side would mean their particular brand of evil would advance, and many would suffer.

In some conflicts, everyone is the bad guy.

I was reminded of this truth while following the events in Charlottesville, Virginia over the last few days. The reprehensible “white nationalists” who showed up Friday night with tiki torches from their local home improvement stores were instantly mocked by liberals and conservatives alike. Here’s Sonny Bunch of the conservative Washington Free Beacon: 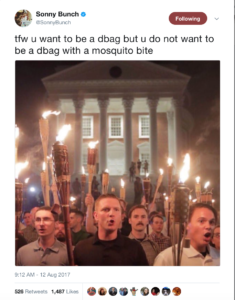 Of course, mockery and humor is a human coping reflex. The reality is that these angry, foolish, mis-educated, boneheads are drinking from a toxic, demonic ideological fountain.

As we know, the next day a small army of counter-protestors descended upon poor Charlottesville. These were to some degree the usual suspects—the professional marxist and anarchist protesters who can be counted on “occupy” Wall Street, rage against capitalism at G7 summits, or shut down a freeway for the environment. However, many of these perenniel protesters are now marching under a new flag. The call themselves “Antifa.”  Here’s the opening paragraph of the Wikipedia entry on the group: 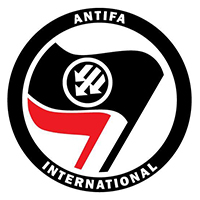 Antifa is a left to far-left, anarchist political movement of autonomous, self-described anti-fascist groups in the United States. The term is loosely used with anti-racism, anti-sexism, anti-homophobia, as well as Anarchism and anti-capitalism.

As we now know, the violent conflict that both sides seemed to be prepared for and to actually crave, unfolded, with tragic results. A young woman was killed and many others critically injured when a clearly unbalanced, amped-up white nationalist bro borrowed a page from the Islamists playbook and rammed a shiny new Dodge Challenger at high speed into a crowd.

Sadly, it is the 1930s all over again. As numerous posts on this site have revealed, “We’ve Seen This Before.” Here’s what I mean by that.

The first half of the 20th Century is essentially a story of two murderous giants locked in a titanic fight to the death—Marxist Communism and Fascist Nationalism. This death match was well underway decades before Nazi Germany invaded Soviet Russia in the summer of 1941.

Meanwhile, democracies like Great Britain and United States—what Winston Churchill liked to call “Christian Civilization”—represented a third way. Let’s call it Christian Capitalism. The Christian Capitalist nations largely looked on from the sidelines as the two competing totalitarian evils fought each other, trying to figure out who to root for based on their own national interests.

The two movements were actually cousins. This was a battle between those who advocated “international socialism” (the marxists) and those who championed “national socialism.” (indeed the official name of the Nazi party in Germany was the National Socialist Party.) Thus the fight was about whose utopian socialist vision was going to prevail.

Throughout the ’20s and ’30s, Communists and Fascists were vying for political power in numerous European countries. And that struggle erupted into a full blown civil war in Spain.

In the late ‘30s, Soviet Russia-aligned Marxists fought Nazi Germany-aligned Fascists in the streets of Spanish cities. Meanwhile, back in the USA and Great Britain, the same artists, actors, novelists, and screenwriters who had romanticized and rooted for the Communist takeover of Russia, began to do the same for the cause of the Communists in Spain.

For a time, Earnest Hemingway embedded himself as a journalist with the Communist rebels in that war and his writing helped further romanticize the cause. He also wrote and funded a propaganda film designed to create sympathy for the communist side. 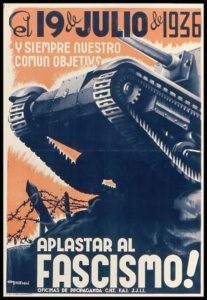 After the fall of the Soviet Union, many Kremlin records were made public. Among the revelations was that Hemingway had been recruited as a Soviet operative and was on the payroll of the KGB.

Again, let me be clear about this, both sides in these struggles for power were and are demonic and reprehensible. Millions of innocents died under Nazi rule. Many millions more died under Communist rule. As with the Iran-Iraq war, there is no side to root for when these two idolatries clash.

But the Arts and Academics crowd has always been infatuated with the Communist-Anarchist side of this evil equation. And have actively worked through movies and other forms of entertainment to encourage you and I to make the same choice. Liberals are largely romantics. Or more likely, extreme romantics are more likely to be liberal. And they find the egalitarian narrative of Communism irresistable.

The problem is that the socialist promise of equality for all is a trap. As in Venezuela currently, after surrenduring your freedoms, everyone ends up equally poor (except for a small clique of privilged elites.)

Think the upraised fist as a symbol of #Resistance is new? As the picture of the Spanish kids at the top of this page reveals, it’s older than the open palmed fascist “heil.” 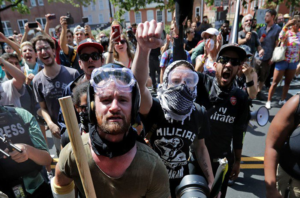 Both ideologies are anti-Christian and anti-Semitic at root and core. Both have resulted in the deaths of millions and millions. Both are authoritarian and freedom-hating.

These two ghosts of the last century are walking among us again. And it is presenting us with the same challenges the Christians of Spain and Germany faced 100 years ago.

In our rush to rightly recoil from and reject one great evil (white nationalism) we can find ourselves tacitly endorsing (or at least accepting) the anti-Christian, anti-biblical premises of the other race-based ideology. That’s a mistake. It’s a mistake the Left and its media allies want to help you make.

The “white nationalists” and alt-right numbskulls can turn out a couple of hundred people at most for one of their tiki torch jamborees, while Antifa and it’s affiliated groups— many of which have billionaire benefactors like George Soros—can turn out tens of thousands on short notice.

(Have I mentioned that I find the racists, Nazis, and white nationalists reprehensible? I truly do.)

This is precisely what happened in Boston yesterday. There, a puny white nationalist rally was dwarfed by an estimated 20 thousand counter demonstrators. A small subset of these, the hard-core Antifa marxist-anarchists threw rocks and bottles filled with urine at police.

Please don’t take my word about the aims of the Antifa movement. Take them at their word: 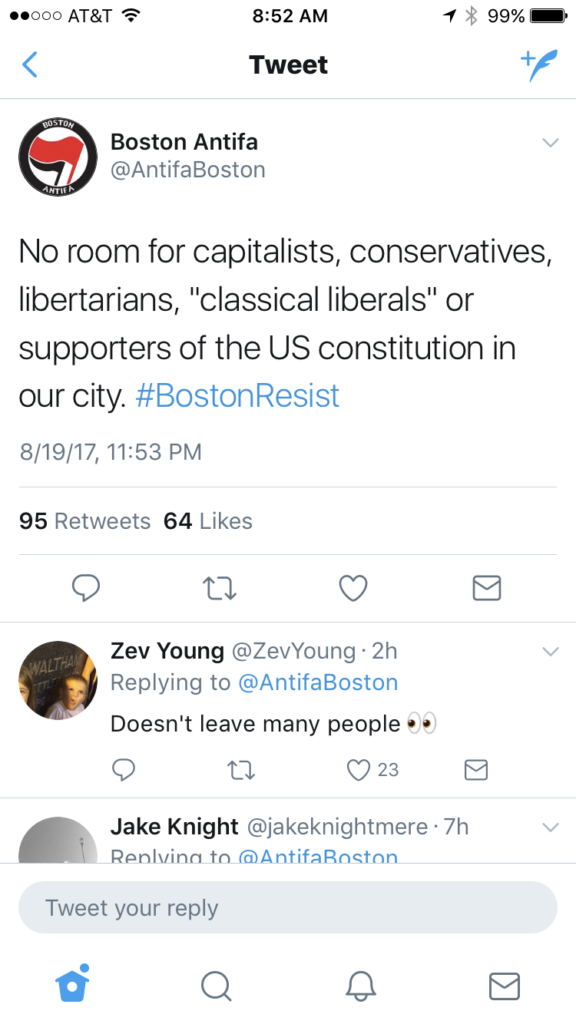 These are the guys “all decent people” are supposed to be siding with in this mud-wrestling match.

Of course, the racists are despicable in their own special ways.

Why do I keep re-empasizing how vile and nasty I find racism in all forms, particularly white supremicism? First, because it’s true and I don’t want to be misinterpreted. But also because the current environment of hysteria demands it.

Right now there is a push to use the appearance of these nasty little frat boys and their kreepy klanny uncles as a club to beat the vast, decent middle of our society into embracing the equally demonic agenda of the anti-Christian, anti-Semitic left.

In other words, if you’re not for Antifa, you’l by default a Nazi.

A few days ago poor Ed Werder, a longtime football analyst for ESPN, and a profoundly decent human being, got called out on Twitter for preferring to stick to writing about sports rather than weigh in on the side of the social justice warriors: 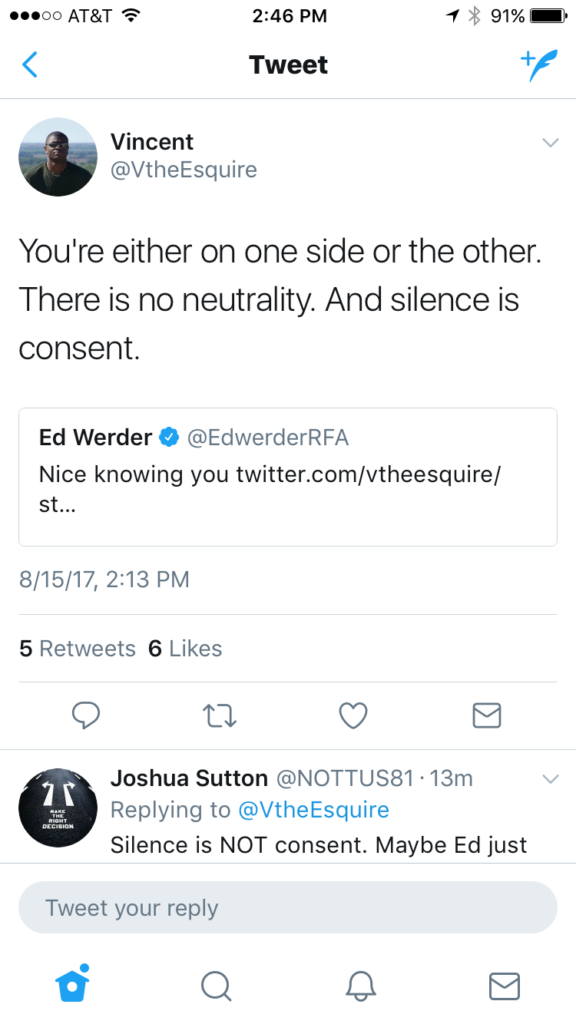 But this is a false dilemma.

As in the ’20s and ’30s, the times would like to insist that Christians choose between two demonic anti-Christ idols, and worship at its altar. There was a third choice then. There is a third choice now.

I’m sorry, but it requires little courage for white Christians to make social media statements condemning racism. I’ve made them. Meant them. Will continue to make them. But the social costs for engaging in this kind of “virtue signaling” are very low.

What is becoming increasingly costly is taking a principled stand against both kinds of evil. In fact, the view I’ve just expressed is now being derisively condemned as “both sides-ism” by the Left. 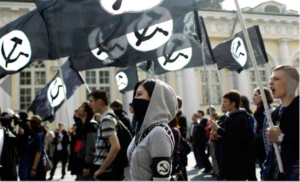 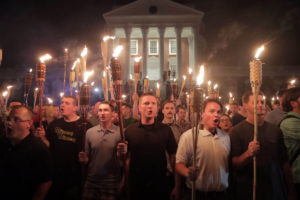 However, just because there’s a name for it doesn’t mean it’s wrong. Evil is evil. An Anti-Christ spirit is an Anti-Christ spirit. And when two brands of evil go to war, anyone who insists that I pick a side is going to be sorely disappointed.

I continue to stand on the side of my brothers and sisters in Christ, regardless of skin tone, sex, or nationality. If you’re “in Him,” I’m with you.

But if you’re against Him, you’re on your own.