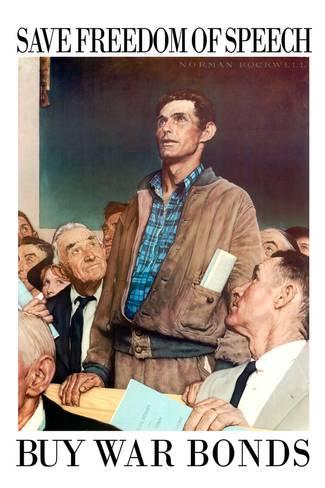 Sure, our 64-year-old cease-fire with North Korea may be about to end. And the Kurdish referendum on national independence could be about to draw Turkey, Iraq, and Iran into a full-scale shooting war. Yes, the entire island of Puerto Rico is a desolated wreck of human suffering. And Russia seems to be moving military chess pieces around the Risk map-board in preparation for taking back some more big chunks of the former Soviet Union.

So by all means, let’s follow the President’s lead and focus 97% of our energy and passion on fighting a bitter culture war over pregame football ceremonies. Makes perfect sense.

In fact, it makes so much sense, I’ll weigh in here by blorching all the random thoughts I’ve been having about it onto a single page. Blorch sequence commencing in 3 . . . 2 . . .

Thought 1. The whole anthem protest gimmick was dying from lack of oxygen until Mr. Trump poured gasoline all over it and flicked a smoldering Twitter cigarette butt on it a few days ago.

Protests, to be effective must shock and offend. An act of protest loses all power the moment it becomes boring or cliche or simply ignored. It’s why “Occupy Wall Street” ultimately fizzled out. 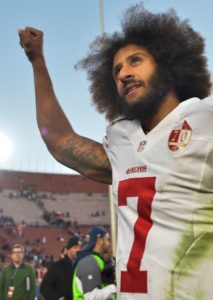 the cameras stop showing up, once regular folks are simply annoyed rather than incensed, it stops being fun and turns into work.

Thought 2. By the way, I’ve always found these NFL anthem protests grating and wrongheaded. Why? Because the national anthem is the wrong target if you’re trying to make some point about policing. Policing is a local issue–reformed at the local level. The national anthem is . . . you know . . . national. It’s right there in the name.

If the police department in St. Louis is broken, then it’s the responsibility of the people of St. Louis to fix it. And they’re in the best position to know what’s broken. Disrespecting our service men and women–past and present–is just counterproductive and ugly and dumb.

Of course, part of the liberal mindset is to reflexively and unthinkingly believe that every human problem can be and should be solved by the (messianic) federal government. When a Progressive says to himself, “there oughta be a law” . . . he always means a Federal law.

Thought 3. Of course, Mr. Trump knew exactly what he was doing when he verbally poked his finger into the chests of the tiny handful of NFL players who were routinely sitting out the anthem. He was baiting the “blame America first” crowd in order to gin up his base and rally knee-jerk support. And the players, the media, the usual politicians, and a big chunk of the country, all inhaled the bait!

The President couldn’t possibly have hoped for a more desirable outcome than the immediate over the top response by the players and owners, and the accompanying media frenzy. His approval numbers are already climbing, now that hundreds of players have willingly chosen to play their designated part as the villain in this melodrama.

Yes this is very bad for our society, but it’s great for the President.

Thought 4. Free speech (for conservatives and Christians) on college campuses has been under vicious assault recently, but we were beginning to win that argument, primarily because we clearly held the moral high ground. You could feel the tide beginning to turn.

But now we have conservatives cheering the President’s calls to force players to respect the anthem or be fired. 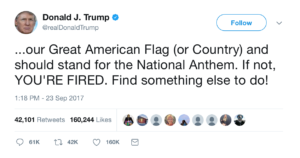 It’s hypocritical to, in one breath, tell college deans they need to allow conservative speakers to speak on campus without threats or intimidation because free speech rights are absolute. And with the next breath endorse firing or fining players who take a knee while country superstar Jodi Lee Whassername belts out the Star Spangled Banner.

Don’t misunderstand. I love this country fiercely. But the call to force reverence for the national anthem is idiotic. And more than a little creepy. (I’m looking at you Lou Dobbs.)

You know who has to force a fake smile and pretend to love their government? People in North Korea.

Thought 5. On the other hand, I’m all for exercising your free marketplace rights to turn off NFL games on principle as long as the players, the league, and the networks like ESPN/Disney insist on injecting “issues” and PC politics into sports. I certainly have.

On principle, I avoid ESPN dot com if at all possible. And I turn off game broadcasts that show me anthem kneelers. Kneeling is the players’ right. Not watching their game is mine. We’re all good. No one is being forced to do something that violates their conscience.

Thought 6: On the left there has been a lot of silly romanticizing of all the players who knelt during the anthem this last Sunday. The narrative is that they were courageously striking a blow for civil rights and equality.

Please. If a player wasn’t taking a knee in the weeks prior to last weekend, but did so after Mr. Trump’s tweet storm, then be honest. His kneeling wasn’t really about a cause. It was about pushing back at the President. Speaking truth to power, as they say. 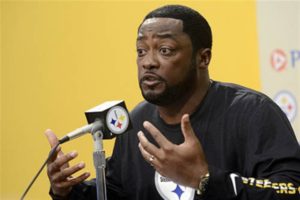 Thought 7: I feel really bad for Coach Mike Tomlin. Everyone, both left and right, completely misread and misconstrued his approach to handling this unnecessary, idiotic poop storm.

Last Sunday, he, like most other NFL coaches was faced with the challenge of trying to keep his team united while hurricane-force winds of a culture war tried to rip the locker room apart.

Many members of his team wanted to kneel during the anthem. A lot of others, both black and white, wanted to stand. Tomlin made one request of his team: “Whatever you do . . . do it together. Talk about it. Vote. And be unified 100% in what you do.

Well the team couldn’t agree. Passions were running high. There were strong convictions on both sides. Yet Tomlin continued to place the emphasis on 100% unity.

So displaying savvy worthy of King Solomon, Tomlin essentially said, “Okay, if we can’t be unified in what our posture is going to be during the anthem, we’ll skip it.” The team stayed in the tunnel during the anthem rather than provide some dramatic spectacle for the benefit of the gawking cameras.

Immediately, social justice warriors on the left, looking through the lens of their preferred narrative, praised the Steelers’ “boycott” of the anthem. Conservatives saw the headlines about the “boycott” and began a verbal crucifixion of Tomlin and the Steelers.

In reality, Tomlin’s team didn’t “boycott” anything. He simply said, in effect, “We didn’t ask for this mess. A handful of activists and politician trying to stir the pot put us in this no-win situation. So we’re going to sit this dance out. We choose “none of the above.” Let us know when ya’ll stop being bat poop insane.”

There was just one problem. Tomlin’s goal and strategy was to keep the whole team unified and doing the same thing—together. But at the last minute, Steelers offensive lineman Alejandro Villanueva stepped out of the tunnel before the anthem was completed. So he–a former Army Ranger who did three tours of 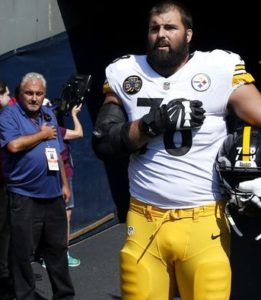 duty in Afghanistan–came to attention and put his hand over his heart. As the cameras rolled and snapped away, the lone Steeler, a former war hero no less, stood for Old Glory.

Villanueva the patriotic veteran became an instant hero among those grieved by the anthem protests. His picture was shared endlessly on social media. His jersey rocketed to the top of the list of most sold.

So, in the very same way liberals attached a false narrative to Tomlin’s “boycott,” conservatives instantly crafted their own false narrative around Villanueva’s hand-on-heart emergence from the tunnel.

As FoxNews.com reported, Villanueva later said in an interview: “Unfortunately I threw my teammates under the bus, unintentionally. Every single time I see that picture of me standing by myself I feel embarrassed.”

I have tremendous respect and admiration for Villanueva, but I understand why he’s embarrassed. His coach tried to bring some non-political sanity to a political circus. Tomlin tried to keep his players from being cynically used pawns in some larger war. And Villanueva inadvertently cut his legs out from under him.

Tomlin is still being roasted on social media by a lot of the God-and-Country folks I usually agree with. But they’re dead wrong.  I think his voice was the wisest, sanest, most reasonable one I heard last Sunday:

“We’re not going to play politics. We’re football players, we’re football coaches,” said Tomlin. “We’re not participating in the anthem today, not to be disrespectful to the anthem, to remove ourselves from the circumstance.”

Amen, coach. Thanks for trying to bring us what most of us really want . . . sports as an entertaining refuge from our ugly politics.