I owe my vast and demanding readership a follow-up to my previous post about the long-term legacy of the Obama presidency. You’ll find the Part 1, “The Weaponizing of the Federal Bureaucracy” here.

Prior to the 1970s, Journalism students in America’s colleges and universities were taught a code of ethics that demanded objectivity in their reporting. It was understood that reporters and writers would have viewpoints and biases, but that they had a professional responsibility to keep their opinions out of their writing and to set their biases aside when reporting the news. No, this was never perfectly achieved but it was the ideal to which professionals aspired and the standard to which they were held.

Students were also taught that journalists played a vital role in American democracy–namely, keeping the government accountable and keeping the citizenry informed about what their government was up to. They inherited a tradition from Enlightenment Europe that viewed the press as a “Fourth Estate”–and therefore a pillar of civilized societies.

Americans understood that one of the key traits distinguishing the great Western democracies from totalitarian states and banana republics was a press that was free, able and willing to challenge the government.

Sure, guys like Walter Cronkite were ideological liberals. But the point is, Cronkite and his generation cared about being perceived as objective. He didn’t allow the mask to slip until late in his career and life.

All of that began to change when the maoist hippie protesters and campus sit-in organizers of the sixties became the adjunct professors of the seventies and the tenured professors or deans of the eighties.

Once these “Progressives” were solidly in control of of the nation’s “J Schools” (and the rest of Liberal Arts departments for that matter) they began turning out a new kind of journalist with a new sense of mission.

These new reporters no longer saw their mission to be informing the public of the facts (whatever those facts might be) and holding government officials accountable (no matter which party might be in power.)   This new generation of journalists very consciously viewed themselves as a force for societal transformation. 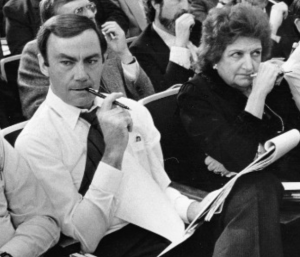 Sam and Helen: The Reagan Years

As the battle lines of the”culture wars”  formed (especially after 1973’s Roe v. Wade), this new breed of journalists picked a side.

This made advancing a set of agendas the primary mission of reporters, rather than objectively reporting events. And advancing agendas required actively helping one political party’s candidates and hindering the other’s. It also meant moving the electorate to the left.

All of this was accomplished subtly but powerfully through the reporter’s and editor’s power to decide what is “news” and what isn’t. To choose which questions to ask and which to leave unasked. And to choose who is questioned and who is left alone.

This wave of reporters were already well up the ranks of the nation’s news organizations by the time Ronald Reagan took the oath of office in 1981. Some older reporters sensed the shift and threw themselves into the agenda-driving fray.

As long as Republicans were the party in power, reporters and editors could continue to plausably claim they were continuing to fulfill their independent and objective watchdog role. But with the election of Bill Clinton, that claim became harder to square with reality .

Such claims became laughable when Barack Obama got his party’s nomination and the Republican nominee, the moderate John McCain chose Sarah Palin as his running mate. The news media’s advocacy became an powerful asset for the Obama cause–and an unsurmountable obstacle for Team McCain.

After the election, the country’s most incompetent and corrupt administration since Warren G. Harding’s benefited from a news media and liberal blogosphere that saw its sole job as running interference for President and his allies in Congress.

In the early days, the agenda-mongering in the press was uncoordinated and non-orchestrated. It succeeded organically because of a shared world view — everyone pretty much agreed with everyone else. But that all changed with Mr. Obama’s candidacy and presidency.

reporters, writers, bloggers, and academics to join. Ultimately the list grew to more than 400 of the nation’s key journalists working at most of the elite media outlets. The secret network allowed leftist journalists to coordinate messaging and strategy.

Journolist offered the Obama administration a power to dispense preferred talking points and suppress unflattering news narratives that must have made Vladimir Putin envious . Of course, Team Obama happily accepted.

The existence of this group explains why, to the this day, Mr. Obama looks like he’s been slapped in the face with a wet mackerel on those rare occasions a reporter dares to ask him a hard or embarrassing question.

When the existence of Journolist leaked out, it was hastily shut down, but it has almost certainly been reconstructed in a stealthier way. In a broader sense, journalists now view themselves as righteous soldiers in the culture wars, fighting with the tools at their disposal to shape public opinion and make sure the “right” people get elected.

Sure there are a few exceptions — throwbacks to the earlier breed of objective journalist. ABC’s Jake Tapper comes to mind. But these are rarities. Real journalists generally don’t get promoted, or, if one slips through the system, don’t stay employed.

The most recent example is CBS reporter Sharyl Attkisson, who tended to ask tough questions about the Obama administration’s Solyndra boondoggle, the Fast and Furious gun walking scandal, and Benghazi. Her pursuit of the Benghazi story was the last straw for her colleagues at CBS. She was instructed to play ball. She refused and resigned.

No, the presidential candidacy of Barack Obama in 2008 didn’t cause the death of journalism. But it finally exposed the truth that the corpse was cold.